Berwick upon Tweed was captured by the English on 30th March 1296, as the first significant battle of the 'First War of Scottish Independence'.

The Capture of Berwick was the first significant battle of the First War of Scottish Independence in 1296.

Upon the death of Margaret, Maid of Norway, in late September 1290, there arose a number of claimants to the throne of Scotland. The Guardians of Scotland were the de facto heads of state until such time as a king would be chosen. The late king, Alexander III had been married to Margaret of England, sister to Edward I, and he was asked to arbitrate in the dispute.

John Balliol, a descendant of King David I was chosen and inaugurated at Scone, on St. Andrew's Day, 30 November 1292. Edward I treated Scotland as a feudal vassal state, claiming contributions towards the costs for the defence of England. When he demanded military support for his war against France, the Scots responded by forming the Auld Alliance with the French, and launched an unsuccessful attack on Carlisle.

After the raid on Carlisle, the English, under Edward I, began the initial conquest of Scotland in the first phase of the war. On the Wednesday in Easter week, being the twenty-eighth day of March, the Edward passed the river Tweed with his troops and stay that night in Scotland at the priory of Coldstream. From there he marched on the town of Berwick.

Berwick-upon-Tweed, a Royal burgh that sat just north of the border, was Scotland's most important trading port. The garrison was commanded by William the Hardy, Lord of Douglas, while the besieging party was led by Robert de Clifford, 1st Baron de Clifford. Contemporary accounts of the number slain range from 4,000 to 17,000. Then they took the castle, whereupon Douglas surrendered and his life and those of his garrison were spared.

Text from Wikipedia, available under the Creative Commons Attribution-ShareAlike License (accessed: 04/04/2016).
Visit the page: Capture of Berwick (1296) for references and further details. You can contribute to this article on Wikipedia.
13th Century Berwick upon Tweed Anglo-Scottish Wars 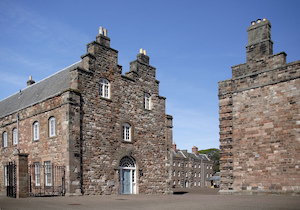 Berwick upon Tweed
- Overview About History Map Street View The northernmost town in England, on the East coast at the mouth of the River Tweed. Early history In the post-Roman period, the area ...

Berwick upon Tweed
- Overview About History Map Street View The northernmost town in England, on the East coast at the mouth of the River Tweed. Early history In the post-Roman period, the area ...