Arthur Holmes was born in Hebburn on the 14h of January 1890. He spent much of his childhood in Low Fell, Gateshead. Holmes went on to become a renound geologist who made major contibutions to undertanding the age of the Earth and of plate techtonics. He was also head of the Department of Geology, Durham University, from 1924-1943.

Prof Arthur Holmes FRS FRSE LLD (14 January 1890 – 20 September 1965) was a British geologist who made two major contributions to the understanding of geology. He pioneered the use of radiometric dating of minerals and was the first earth scientist to grasp the mechanical and thermal implications of mantle convection, which led eventually to the acceptance of plate tectonics.

He was born in Hebburn, near Newcastle-upon-Tyne, the son of David Holmes, a cabinet-maker, and his wife, Emily Dickinson.

As a child, he lived in Low Fell, Gateshead, and attended the Gateshead Higher Grade School (later Gateshead Grammar School). At 17, he enrolled to study physics at the Royal College of Science (now Imperial College London), but took a course in geology in his second year, which settled his future, against the advice of his tutors. Surviving on a scholarship of £60/year was difficult and on graduating hall, he took a job prospecting for minerals in Mozambique. After six months, with no discoveries, he became so ill with malaria that a notice of his death was posted home. However, he recovered enough to catch the boat home and became a demonstrator at Imperial College.

He obtained his Doctorate of Science in 1917, and in 1920 he joined an oil company in Burma as chief geologist. The company failed, and he returned to England penniless in 1924. He had been accompanied in Burma by his three-year-old son, who contracted dysentery and died shortly before Holmes's departure.

He married his first wife, Margaret Howe, in 1914. After she died in 1938, Holmes in the following year married Doris Reynolds, a geologist who had joined the teaching staff at Durham. After his death, she edited the third edition of the Principles.

Age of the earth

Holmes was a pioneer of geochronology, and performed the first accurate uranium-lead radiometric dating (specifically designed to measure the age of a rock) while an undergraduate in London, assigning an age of 370 Ma to a Devonian rock from Norway, improving on the work of Boltwood who published nothing more on the subject. This result was published in 1911, after his graduation in 1910.

1912 saw Holmes on the staff of Imperial College, publishing his famous book The Age of the Earth in 1913 in which he argued strongly for radioactive methods compared with methods based on geological sedimentation or cooling of the earth (many people still clung to Lord Kelvin's calculations of less than 100 Ma). He estimated the oldest Archean rocks to be 1,600 Ma, but did not speculate about the Earth's age. By this time the discovery of isotopes had complicated the calculations and he spent the next years grappling with these. His promotion of the theory over the next decades he earned the nickname of Father of modern geochronology. By 1927 he had revised this figure to 3,000 Ma and in the 1940s to 4,500±100 Ma, based on measurements of the relative abundance of uranium isotopes by Alfred O. C. Nier. The general method is now known as the Holmes-Houterman model after Fritz Houtermans who published in the same year, 1946.

In 1924 he was appointed to the newly created post of reader in geology at Durham University. Eighteen years later his achievements were recognised, when he became a Fellow of the Royal Society in 1942. In the following year he was appointed to the chair of geology at the University of Edinburgh, following the death of Prof Thomas James Jehu, which post he held until retirement in 1956. In 1944 he published the first edition of his Principles of Physical Geology which became a standard textbook in the UK and elsewhere.

Holmes championed the theory of continental drift promoted by Alfred Wegener at a time when it was deeply unfashionable with his more conservative peers. One problem with the theory lay in the mechanism of movement, and Holmes proposed that Earth's mantle contained convection cells that dissipated radioactive heat and moved the crust at the surface. His Principles of Physical Geology ended with a chapter on continental drift. Part of the model was the origin of the seafloor spreading concept.

The Arthur Holmes Medal of the European Geosciences Union and a crater on Mars have been named in his honour.

The Durham University Department of Earth Sciences' Isotope Geology Laboratory is also named after him, as is the students' Geology Society.

Text from Wikipedia, available under the Creative Commons Attribution-ShareAlike License (accessed: 16/09/2018).
Visit the page: Arthur Holmes for references and further details. You can contribute to this article on Wikipedia.
People in History Hebburn Low Fell Durham University 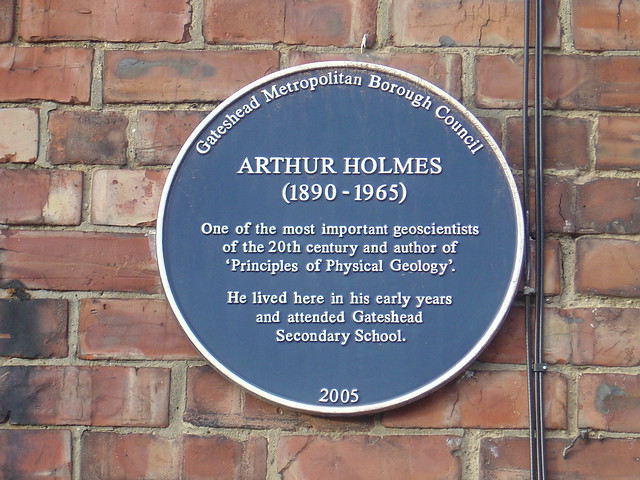 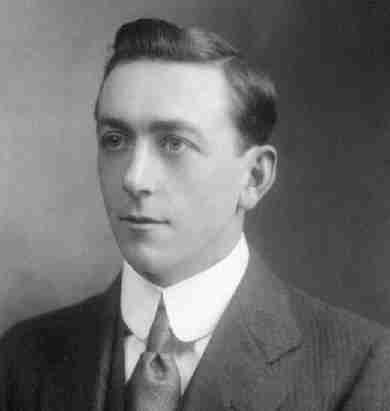 Plaque Marks Birthplace Of Hebburn "Rock Star"
- 19th March, 2009. "The birthplace of Hebburn's very own international "rock star" has at last been recognised. Among the things named in honour of geologist, Arthur Holmes, are a ...

Plaque Marks Birthplace Of Hebburn "Rock Star"
- 19th March, 2009. "The birthplace of Hebburn's very own international "rock star" has at last been recognised. Among the things named in honour of geologist, Arthur Holmes, are a ...