Alan Hull, born in Benwell in 1945, was a singer-songwriter and founding member of the folk rock band Lindisfarne.

Hull was born at 68 Sutton's Dwellings, Benwell, Newcastle Upon Tyne. He attended Rutherford Grammar School, Newcastle after passing the eleven-plus in 1956 and was given a guitar at the age of twelve. Hull wrote his first song soon afterwards.

He became a member of the band The Chosen Few alongside keyboard player Mick Gallagher in 1962. He supported himself by working as a window cleaner, one year by working as a nurse at a mental hospital and as a driver for Newcastle Co-op TV Departnment while appearing as a folk singer and guitarist in local clubs before helping to form Brethren and Downtown Faction, which evolved into Lindisfarne in 1970. He also released a one-off solo single, "We Can Swing Together", which was re-recorded with the group on their first album, Nicely Out of Tune, and became a regular favourite in their stage performances.

As the group's most prolific songwriter and joint lead vocalist, Hull came to be regarded as its leader. In 1972, dissatisfied with the sound and critical reception of their third album Dingly Dell, he considered leaving the group but instead he and joint lead vocalist Ray "Jacka" Jackson formed a new six-piece Lindisfarne the following year, leaving the three other original members to form Jack The Lad. He also released his first solo album, Pipedream, the same year and published a book of poems, Mocking Horse. Alan Hull appeared in "Squire", an episode of the BBC's Second City Firsts drama series.

Lindisfarne disbanded in 1975 and Hull released a second solo album, Squire, then formed the short-lived Radiator, which also included drummer Ray Laidlaw of Lindisfarne and Jack the Lad. At the end of 1977 the original line-up of Lindisfarne reformed after a well-received Christmas show at the Newcastle City Hall which was broadcast on local radio. Thereafter he combined his musical career as front man of the group with a solo career.

He was also a staunch Labour Party activist. For a time he was secretary of his local constituency Labour Party. He performed in Blackpool to coincide with the Labour Party conference in 1990 and played at numerous benefit concerts for striking or redundant miners and shipyard workers.

In January 1994, he recorded Back to Basics, a live all-acoustic survey of the best of his songwriting from 1970 onwards.

On 17 November 1995, whilst working on a new album, Statues & Liberties, Alan Hull died suddenly of a heart thrombosis, at the age of 50. After his death, Hull's ashes were scattered at the mouth of the River Tyne.

On 19 July 2012, following a public campaign led by Barry McKay, Lindisfarne's manager during the 1970s, an Alan Hull memorial plaque was unveiled on the front of Newcastle City Hall, at a ceremony attended by hundreds of fans and broadcast by filmed by Sky and ITV Tyne Tees.

Text from Wikipedia, available under the Creative Commons Attribution-ShareAlike License (accessed: 27/03/2016).
Visit the page: Alan Hull for references and further details. You can contribute to this article on Wikipedia.
People in History Music and Dance Newcastle City Hall 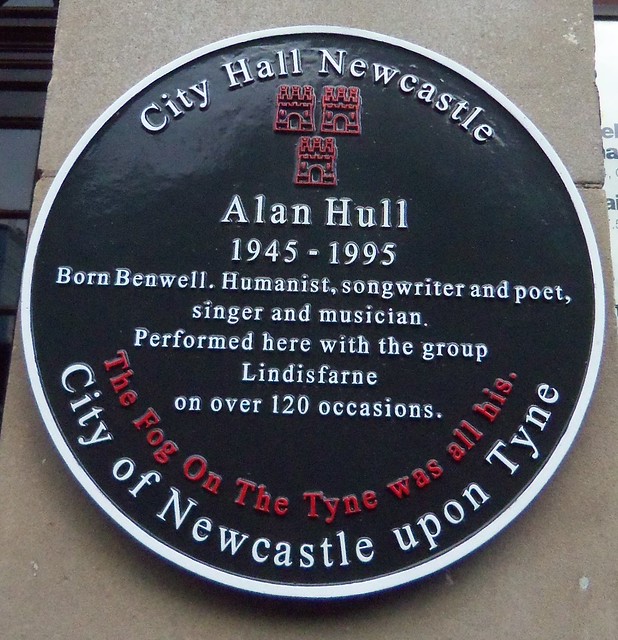 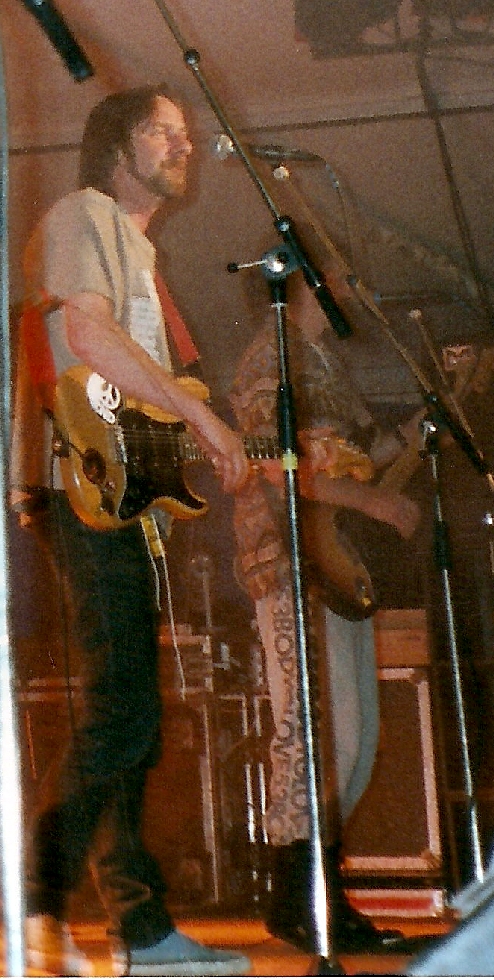 Alan Hull on stage with Lindisfarne in 1991
- Photo by Rodhullandemu, available under a CC-BY-SA 3.0 licence.

Alan Hull on stage with Lindisfarne in 1991
- Photo by Rodhullandemu, available under a CC-BY-SA 3.0 licence.