St Mary's College is a college of Durham University in England. Following the grant of a supplemental charter in 1895 allowing women to receive degrees of the university, St Mary's was founded as the Women's Hostel in 1899, adopting its present name in May 1920.

St Mary's original location was at 33 Claypath with six students before moving into Abbey House and then to The College behind Durham Cathedral. This is now occupied by the Chorister School. It is one of the Hill colleges on Elvet Hill, having been situated there since it moved into the Fergusson Building on the new site in 1952. The foundation stone for the Fergusson Building was laid in 1947 by Her Royal Highness Princess Elizabeth. Of all the colleges currently located on the Hill, St Mary's is the only one to have been founded in the 19th century.

Change to a mixed college

For several decades there had been debates about St Mary’s continuing as a single-sex college within the University, and it had been originally mooted in the 1970s that it should go mixed. The Middle Common Room, which consisted of postgraduate students, went mixed in the early 1990s. St Mary's was the last of Durham's colleges to become entirely mixed when it took in both males and females at undergraduate level in 2005, ending over a hundred years of tradition. During the decision-making process the student body was split. Some members of the College felt so strongly against the proposed plans in 2000 that they protested, marching on the University Offices at Old Shire Hall. There had been several polls of the student body over the issue of the College going mixed, and from 1999 onwards these were held almost annually. The results tended to be close, but marginally in favour of retaining the status quo.

The transition to a mixed college took place in 2005, and the first male JCR President, James Liddell, was elected in 2009. The college still provides single-sex accommodation for both sexes as and when required. The recently refurbished Shepherd wing of the Fergusson building is a segregated women's-only area for students who, for personal, religious or other reasons, would prefer single sex accommodation. A refurbishment of the Williamson building took place between July and December 2007.

The College is centred on two main buildings: the Fergusson and Williamson Buildings. The Fergusson building, designed by Vincent Harris, was built in the early 1950s and houses most of the College facilities, including the college's dining hall, two computer rooms, the College library, the Chapel, a laundry, two student common rooms and three music rooms. The Chapel is located on the top floor of the North East wing and was designed by the ecclesiastical architect George Pace. In addition to interiors and furniture produced by Thompson of Kilburn (the Mouseman), it now houses a sculpture of the Blessed Virgin Mary by acclaimed sculptor Fenwick Lawson, which was commissioned in 2005 by the College.The basement location of the Chapel prior to the 1960s now houses the JCR Bar which is managed by a Student Sabbatical Bars Steward. Opposite the Bar entrance is the Toastie Bar. At the other end of the basement is the JCR Shop which stocks sweets and snacks as well as toiletries, college clothing and some memorabilia.

The Williamson building was built in the early 1960s and is mainly an accommodation block with 110 study bedrooms. On the ground floor there is a student common room and one half of the lower ground floor contains the JCR fitness room and a laundry.

In the 1990s three ensuite blocks were built on to the front of the Williamson building and are the only ensuite rooms in the college, with the exception of a few located in the Shepherd Wing. These are mainly filled by 2nd, 3rd or 4th year students who move back into college accommodation, but some are made available to students from any year group who require an ensuite room for medical or personal reasons.

In 2015, principal Simon Hackett opened the new Boughton Wing in Williamson building which was established to maintain this provision and provide women-only accommodation to those who require it.

The majority of students located on site are first years, who are required to 'live in'. These students change rooms each term using a 'room ballot' system to ensure that no-one has to share a room for more than one term of their first year. 2nd, 3rd and 4th year students often choose to 'live out' in houses around Durham, although accommodation is available on-site for those who want it. The room ballot ceased to operate at the start of the 2015-2016 academic year and those who lived in kept their rooms for the whole academic year. All those who live on site are fully catered, except in exceptional circumstances.

The College requires the wearing of gowns at formal dinners, which are held between two and three times a term and on the first and last Sunday of each term. Further to this the College requires gowns to be worn at JCR meetings and Matriculation.

Large student led events are held throughout the year, notable highlights include Masquerade Ball, Midsummer Ball and Mary's Day. The College also has its own boat club, which welcomes any members of the college to join in and participate.

The college arms are blazoned as "Argent a Cross Formy Quadrate Gules a Chief Azure thereon a Durham Mitre Or between two Lilies proper."

The college's motto is "Ancilla Domini" and can be translated to "Handmaiden of the Lord."

Text from Wikipedia, available under the Creative Commons Attribution-ShareAlike License (accessed: 28/02/2018).
Visit the page: St Mary's College, Durham for references and further details. You can contribute to this article on Wikipedia.
Durham University 1899

St Mary's College
- "Established in 1899, St Mary's is one of Durham's oldest Colleges. Originally founded as a pioneering women-only College, our community is now mixed...." 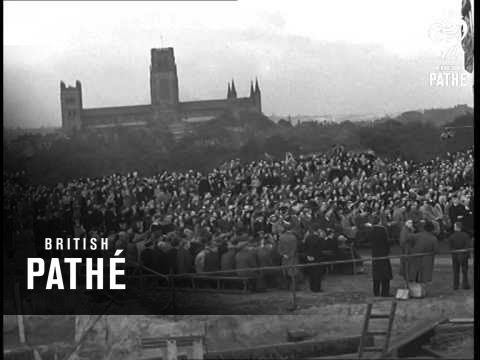 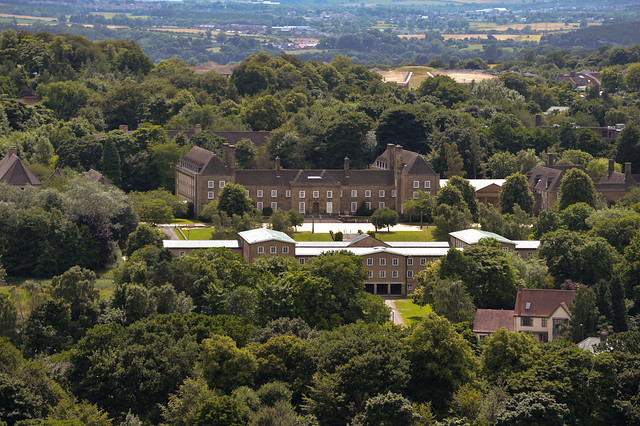 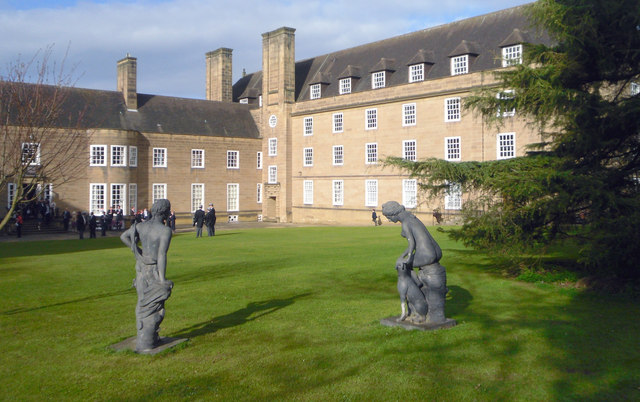 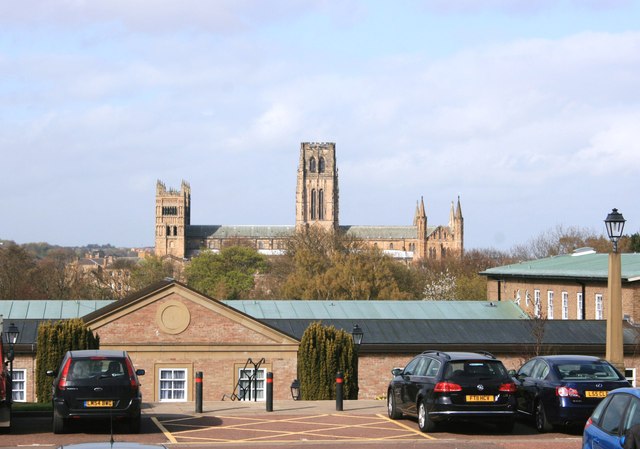 The Cathedral from St. Mary's College 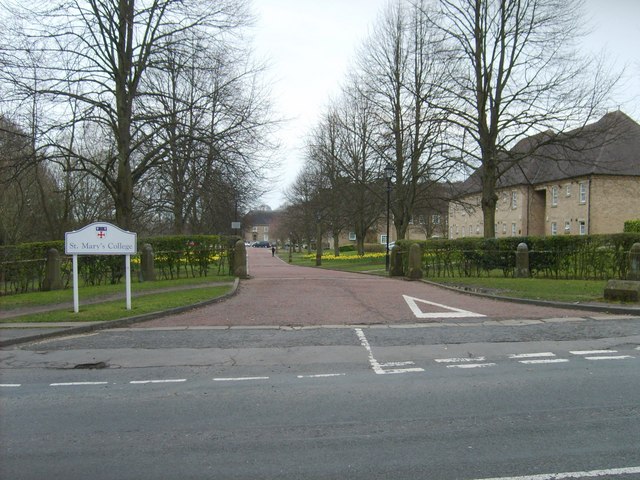 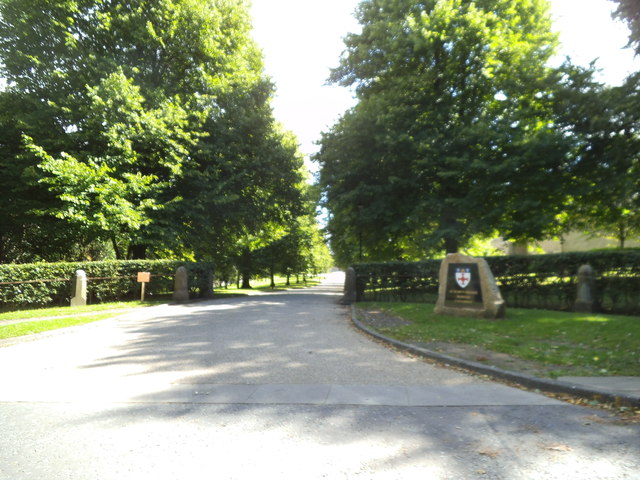 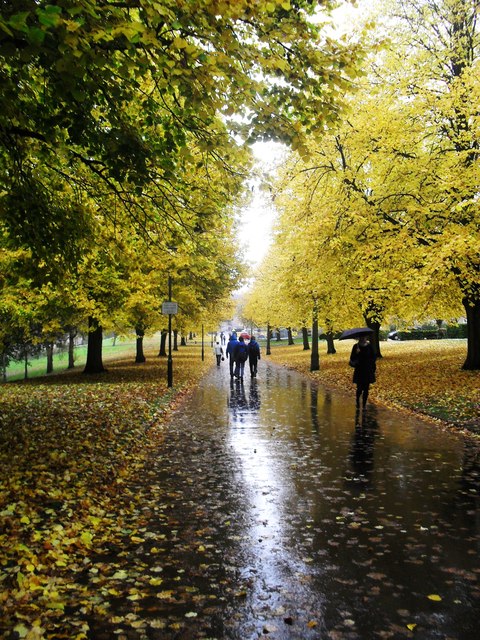 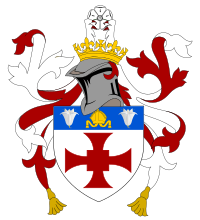 St Mary's College
- "Established in 1899, St Mary's is one of Durham's oldest Colleges. Originally founded as a pioneering women-only College, our community is now mixed...."

The Cathedral from St. Mary's College