Sir Samuel Sadler was a founding father of the chemical industry in Teeside. He established the first oil and chemicals company in Middlesbrough; Sadler & Co. Ltd. in 1869. Sadler was also Mayor of Middlesbrough 3 times, and was the MP for the town from 1900 to 1906.

Sir Samuel Alexander Sadler (1842 – 29 September 1911) was a British industrialist, public servant and the first Conservative Member of Parliament for Middlesbrough, United Kingdom, the town with which his name is associated.

Samuel Alexander was the son of James Sadler and Mary Ann Millership of Langley Hall, near Oldbury, Worcestershire (now Oldbury, West Midlands). Members of the Sadler family contributed greatly to their native district of Oldbury and the Black Country during the nineteenth century, particularly Samuel Alexander's paternal uncle, John Sadler.

Sadler was a chemist by profession and, having studied at the University of London, reputedly under Michael Faraday, he established the successful chemicals business of Sadler and Company Limited based at Middlesbrough – Teesside's first oil and chemicals company.

It was due to the efforts of pioneers such as Sadler that Teesside became established as a leading centre of the chemicals industry in the United Kingdom. He was also a colliery owner and had interests in several colliery companies in County Durham.

Beside his work as an industrialist, Sadler served on Middlesbrough Council from 1873 and became Mayor on three occasions – 1877, 1896 and 1910. He succeeded at the third attempt to be elected as the first Conservative Member of Parliament for the Middlesbrough constituency and unseated his predecessor Joseph Havelock Wilson in the firmly Liberal seat at the 1900 general election, but was defeated by Wilson at the 1906 general. In addition, he became a Freeman of the Borough, served as Justice of the Peace, Alderman and was honoured with a knighthood on 24 July 1905.

Sadler was greatly interested in the Volunteer Force and served as Commanding Officer and later Honorary Colonel of the 1st Durham Rifle Volunteers, which became the 1st Volunteer Battalion of the Durham Light Infantry. He received the Volunteer Decoration. As a result of his efforts in this field, and as a reflection of his popularity due to repeated displays of popular philanthropy, Sadler was affectionately referred to as 'the Colonel'.

Two years following his death, a statue commemorating his service to the town was fashioned by Édouard Lantéri and erected by subscription in Victoria Square, Middlesbrough.[https://web.archive.org/web/20110608130347/http://pmsa.cch.kcl.ac.uk/NE/MB03.htm] There is a photograph in the Frith collection. The statue was temporarily moved in 2004 so that construction could be performed on the square.

Samuel Alexander Sadler married firstly Rachael Sadler Field (1847–1873), his first cousin once removed, daughter of John Field and Mercy Ann Sadler of Oldbury in 1865, by whom he had four children; the eldest, Percy, marrying Mary Young Blair, the daughter of George Young Blair.

In 1874, the year after his wife's death, Sadler married her sister Mercy Sadler Field (b. 1853), by whom he had a further five children.

Record of Sir Samuel Alexander Sadler's parliamentary contributions in Hansard might be viewed on the following link.http://hansard.millbanksystems.com/people/mr-samuel-sadler/

Text from Wikipedia, available under the Creative Commons Attribution-ShareAlike License (accessed: 23/12/2020).
Visit the page: Samuel Sadler for references and further details. You can contribute to this article on Wikipedia.
People in History Statue of Samuel Sadler

Samuel Sadler Con MP Middlesbrough 1900-06
- Image c/o Wikimedia Commons "Published in the UK in 1906 in postcard format in connection with his election campaign....published in 1906 from a photograph probably taken c1900..." 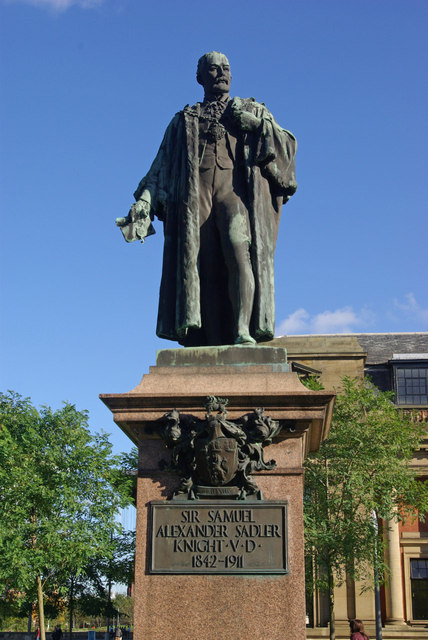 Statue of Samuel Sadler
- Overview Map Street View A statue of Sir Samuel Sadler&nbsp;stands on Centre Square in Middlesbrough. The statue, by Prof. Edward Lanteri, was erected in 1913. The statue is Grade II ...

Samuel Sadler Con MP Middlesbrough 1900-06
- Image c/o Wikimedia Commons "Published in the UK in 1906 in postcard format in connection with his election campaign....published in 1906 from a photograph probably taken c1900..."

Statue of Samuel Sadler
- Overview Map Street View A statue of Sir Samuel Sadler&nbsp;stands on Centre Square in Middlesbrough. The statue, by Prof. Edward Lanteri, was erected in 1913. The statue is Grade II ...