Reg Smythe was born in Hartlepool on the 10th July 1917. He is best known as the cartoonist who created the long-running Andy Capp comic strip, which first appeard in the Daily Mail and Sunday Mirror newspapers in 1957.

He was born in Hartlepool, County Durham, England, the son of Richard Oliver Smyth, a shipyard worker, and his wife Florence, née Pearce. With his father long-term unemployed, he grew up in poverty. He attended Galley's Field School in West Hartlepool, but left at fourteen to take a job as a butcher's errand boy. In 1936, after a period of unemployment, he joined the Royal Northumberland Fusiliers, and was posted to Egypt. His father died during his service.

He served through the Second World War as a machine gunner in the North African Campaign, and by 1945 had been promoted to sergeant. During this time he developed his talent for drawing, designing posters for amateur dramatic productions and selling cartoons to Cairo magazines.

He was demobilised in 1946 and took a job as a telephone clerk for the General Post Office in London. He married Vera Whittaker in 1949; they had no children. He continued to design theatrical posters in his spare time, and was advised to become a professional cartoonist. He sent thirty cartoons to an agent, who sold two to Everybody's magazine for more than his weekly wage at the GPO. While retaining his day job, he was soon drawing sixty cartoons a week, using "Reg Smythe" as his professional name. The cartoonist Leslie Harding (aka "Styx") worked for the same agent, and became his mentor.

He contributed to publications like the Fishtrader's Gazette and the Draper's Record, and drew sketches of council meetings for local newspapers. In 1950 he went freelance, and drew cartoon features like "Smythe's Speedway World" for Speedway World and "Skid Sprocket" for Monthly Speedway World, as well as cartoons for the London Evening Standard, Reveille, Punch, and the Daily Mirror, where he contributed to the paper's "Laughter Column".

The Daily Mirror and Andy Capp

In 1954 the Daily Mirrors art editor, Philip Zec, gave Smythe a regular daily cartoon, "Laughter at Work". Then, in 1957, he was asked by Mirror editor Hugh Cudlipp to create a cartoon character for the paper's Manchester edition. He thought up Andy Capp, a stereotypically lazy, selfish working-class northerner in a flat cap, and his long-suffering wife Flo, during the seven-hour drive from his mother's house in Hartlepool to London.

Capp is thought to have been based on Smythe's father, although Smythe never confirmed that, perhaps because in one early cartoon he depicted Andy as a wife-beater, something he later regretted. Smythe's mother recognised her late husband in Andy, although she insisted Richard was not a violent man. Capp's headgear was inspired by a fellow spectator at a football match Smythe had attended when young, who took off his cap when it started to rain, because he didn't want to wear a wet cap at home that evening.

Originally commissioned for the Mirrors northern edition, Andy Capp was soon appearing in all editions nationwide. The first collection of Andy Capp cartoons was published in 1958. The strip became internationally popular, appearing in at least 700 newspapers in 34 countries, including the Chicago Sun-Times in the USA. The punning title resisted translation: in Sweden it was titled "Tuffa Viktor", in Germany "Willi Wacker", in Austria "Charlie Kappl", in Italy "Carlo e Alice", in France "André Chapeau", in Turkey "Güngörmez Dursun" and in Denmark "Kasket Karl".

In 1982 an Andy Capp musical was produced, starring Tom Courtenay with music by Alan Price, first in Manchester, later in London, and then to great success in Finland. A TV series aired on ITV in 1988, written by Keith Waterhouse and starring James Bolam, but ratings were poor and a second season was cancelled.

Smythe returned to his hometown of Hartlepool in 1976, living a reclusive life on a large estate. His first wife, Vera, died in 1997, and in 1998 he married Jean Marie Glynn Barry, but later the same year he died of lung cancer. He had left a stockpile of more than a year's worth of Andy Capp cartoons. His contract with the Daily Mirror had required him to train a replacement, but he had not done so. After the stockpile had been published, the strip was continued by writer Roger Kettle and artist Roger Mahoney.

In 2007, after years of local speculation and fundraising, a bronze statue commemorating Andy Capp was erected near to the Harbour of Refuge Pub in Smyth's hometown of Hartlepool. Measuring five feet, eight inches, the Statue cost £20,000 and was designed by Shrewsbury sculptor Jane Robbins.

Text from Wikipedia, available under the Creative Commons Attribution-ShareAlike License (accessed: 17/02/2017).
Visit the page: Reg Smythe for references and further details. You can contribute to this article on Wikipedia.
People in History Andy Capp Statue 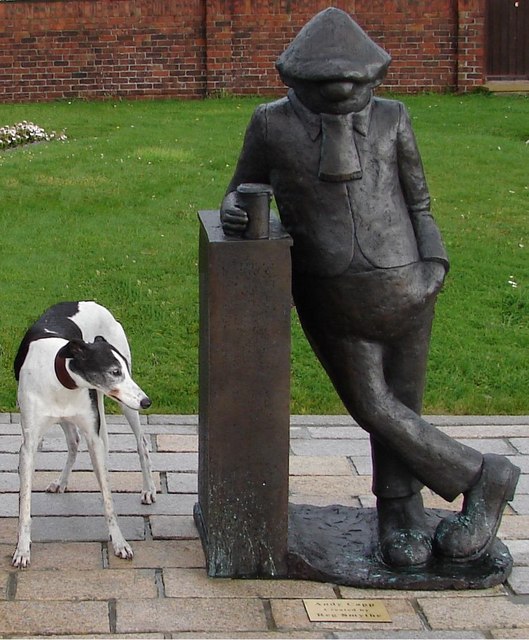 Andy Capp Statue
- Overview Map Street View The statue of cartoon character Andy Capp is located on Croft Terrace in Headland, Hartlepool. It was unveiled in 2007 by the widow of Andy Capp&rsquo;s ...

Andy Capp Statue
- Overview Map Street View The statue of cartoon character Andy Capp is located on Croft Terrace in Headland, Hartlepool. It was unveiled in 2007 by the widow of Andy Capp&rsquo;s ...