NORTON (St. Mary), a parish, in the union of Stockton, S. W. division of Stockton ward, S. division of the county of Durham, 2 miles (N.) from Stockton; containing 1,628 inhabitants. The parish comprises by computation 4,000 acres of land, in its general aspect level. The soil immediately surrounding the village is of a light but rich loamy nature, and well adapted for market-gardens, for which this place is celebrated, while to the north and west is a strong red clay, producing in favourable seasons excellent wheat: the substrata are beds of sand and gravel. The portion of woodland is very small, and the scenery presents little of a striking character, but embraces in the distance fine views of the Cleveland hills. There are some brick and tile manufactories, a glue factory, and a tannery. The road from Stockton to Durham used to run through the village, but was diverted a mile to the west about 1830; the main line of the Clarence railway passes on the north, and the Stockton branch diverges from it at the tollgate, in its course to the river Tees. By an act of the 12th of Queen Anne, the townships of Stockton, East Hartburn, and Preston were separated from this parish, and formed into the parish of Stockton. The living is a vicarage, valued in the king's books at £31. 11. 5½.; patron, the Bishop of Durham; impropriators, William Wharton, Esq., of Durham, and others. The rectorial tithes have been commuted for £271, the vicarial for £80; and there are about 260 acres of glebe valued at £289, exclusively of the vicarage-house and gardens valued at £40. The church which was collegiate, and from 1227 till the Dissolution had eight prebendaries, stands upon elevated ground, and is partly Norman, and partly in the early English style, bearing traces of its antiquity and former importance, particularly in its square central tower springing from four circular arches. The south transept was called Pettie (or little) porch, and by some was named Pity porch, from an altar of the Virgin Mary; in Blakiston porch, which forms the north transept, was a well-carved recumbent figure in armour, now removed to the south side of the communion-table, and supposed to be a memorial of the Blakiston family. The edifice was repaired, and two galleries were added, in 1826. There are places of worship for Wesleyans and the Society of Friends. Norton enjoys the privilege, with Stockton, of one of the scholarships founded in the university of Oxford, in 1536, by John Claymond, vicar of the parish, and first president of Corpus Christi College. A free grammar school, which has an income of £40 a year, appears to have existed since the year 1600. Bernard Gilpin, "the Apostle of the North," was instituted to the vicarage on his return from the continent, in 1552. Jeremiah Moore, who had in early life been made a slave to the Turks by the cruelty of his brother, and who was subsequently distinguished for his philanthropy and benevolence; Christopher Middleton, the first navigator employed by the lords of the admiralty to discover a North-West passage; Admiral Policarpus Taylor, eminent for his naval services; and the Rev. John Wallis, author of the History of Northumberland, all died here. 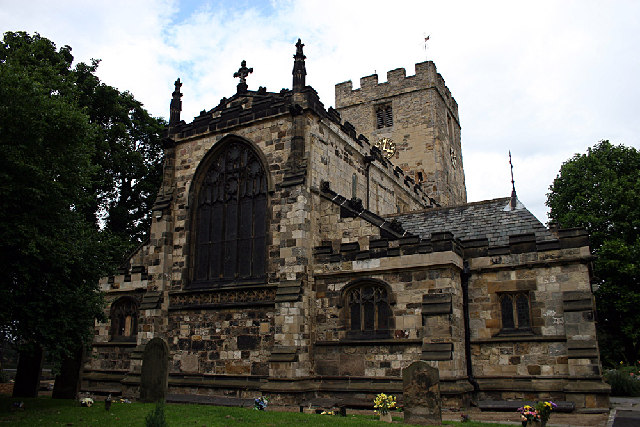 Church of St. Mary the Virgin
- Overview Map Street View St Mary's is the Parish Church at Norton, Stockton-on-Tees. The church was originally built in c.1020 AD[1], and extended in the late 12th and 15th centuries. ...

Church of St. Mary the Virgin
- Overview Map Street View St Mary's is the Parish Church at Norton, Stockton-on-Tees. The church was originally built in c.1020 AD[1], and extended in the late 12th and 15th centuries. ...