Manors railway station is on the East Coast Main Line in the United Kingdom, located in Newcastle upon Tyne, Tyne and Wear. It is down the line from and is situated between to the south and to the north. Its three-letter station code is MAS.

The station and all trains serving it are operated by Northern. The Manors Tyne & Wear Metro station is located about away.

Manors was previously a much larger and more significant station at the junction of the main line and the line towards Gosforth. It had nine platforms. Most of the station was closed in 1978 when the Gosforth line was turned over to the Tyne and Wear Metro and the buildings were subsequently demolished to make way for offices.

The original station named Manors was opened on 1 July 1847 by the Newcastle and Berwick Railway, which amalgamated with the York and Newcastle Railway to form the York, Newcastle and Berwick Railway a few weeks later. Manors station opened on 30 August 1850 to replace a temporary station that became a coal depot, and had two platforms on a bridge over Trafalgar Street. When the East Coast Main Line was widened to four tracks in 1887, an additional two platforms were built.

On 1 January 1909, the former Blyth and Tyne Railway terminus at New Bridge Street closed and the line was extended to join the East Coast Main Line between Manors and Newcastle Central. Manors North was opened on this line, with two through platforms and three bays. The original station was renamed Manors East. The former station at New Bridge Street became a coal yard which supplied customers in the east of the city.

When the two stations were combined on 20 February 1969, Manors North formed platforms 1–5 and Manors East platforms 6–9.

From 1904 until 1967 the lines through the station were electrified, with the third-rail (North Tyneside Loop) and a short overhead electrification from Trafalgar South yard (Newcastle Quayside branch). The East Coast Main Line was re-electrified in 1990. There were three signal boxes that controlled the approaches to the Manors area - Argyle Street (187? - 1964), Manors North (1909 - 1964), Manors Junction (1909 - 1964). A major re-signalling of the Newcastle district in 1964 resulted in the closure of these boxes. The original Manors Junction signal box was burnt out in 1943, and its replacement was at the western end of Manors East, between platforms 7 and 8.

In addition to the busy electric service to the coast, Manors was a terminus for trains to Morpeth, Blyth and Newbiggin. Although the Morpeth service had gone by BR days, the Blyth/Newbiggin passenger route survived until 1964. In LNER days, the bay platforms were used as standage for electric sets and for short workings to Benton.

Most platforms at Manors closed on 23 January 1978 to allow for the construction of the Tyne and Wear Metro. The station now has two platforms, on the site of the previous platforms 7 and 8. Other parts of the former station remain, including heavily overgrown platforms 1 and 2 and parts of platform 9. The station is unstaffed, and the only facility is a shelter with a telephone - anyone wishing to travel must obtain their tickets prior to travel or on board the train. The platforms are reached by a footbridge rather than the original subway, so the station is not accessible for wheelchair or mobility-impaired users.

Manors station is very popular with railway photographers and enthusiasts because it lies in the middle of the tracks of the East Coast Main Line allowing very good views of passing trains, which include freight, passenger and empty stock movements to/from the maintenance depot at Heaton.

The station received a new shelter, cycle racks, seats and a timetable information board in early-2015 as requested by a small group of enthusiasts.

There is a basic hourly service on Mondays to Saturdays operated by Northern, which runs between Newcastle/Metrocentre and Morpeth - one evening peak service continues through to and and the corresponding morning train from there also calls. This is a noticeable improvement on the weekday peak-only service that the station formerly received in the 1980s, 90s & early 2000s

The station briefly featured in the 1971 film Get Carter, showing the long staircase from the Trafalgar Street entrance to Manors East. 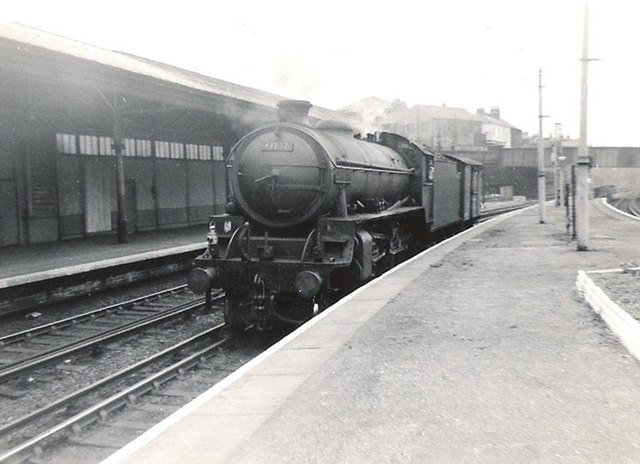 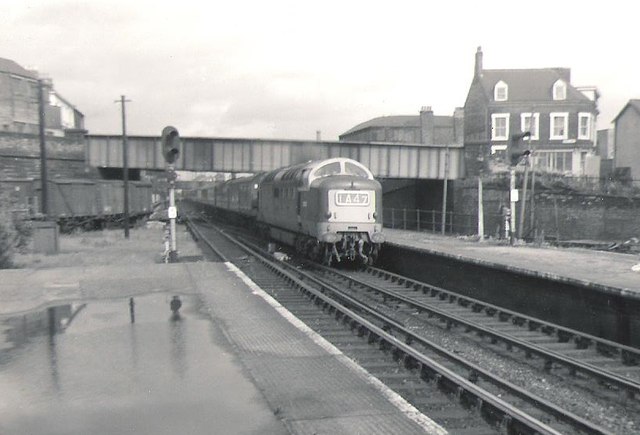 D9019 approaching Manors with a train from Edinburgh 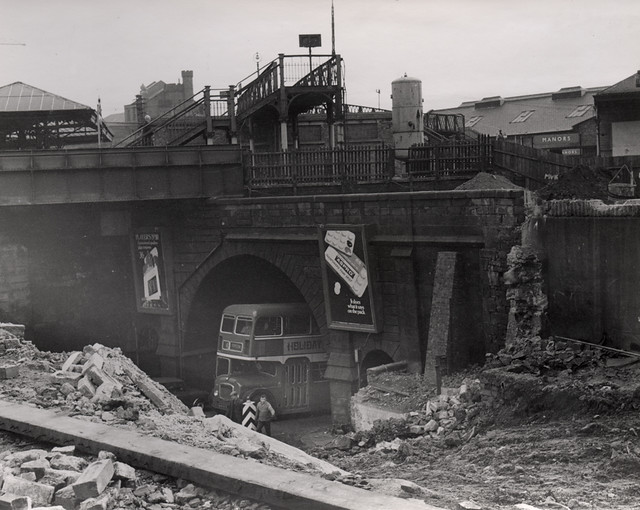 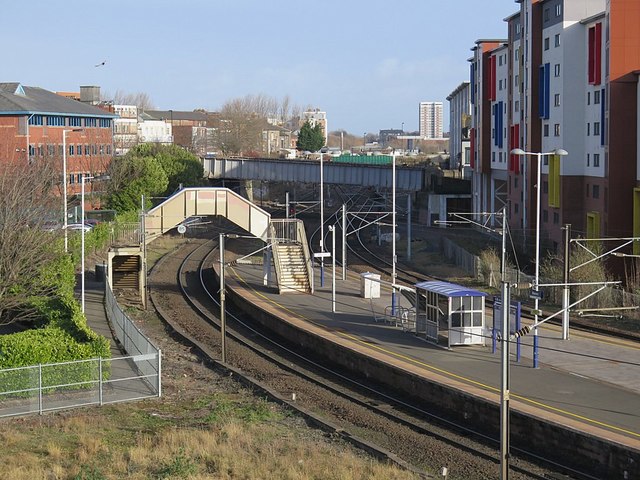 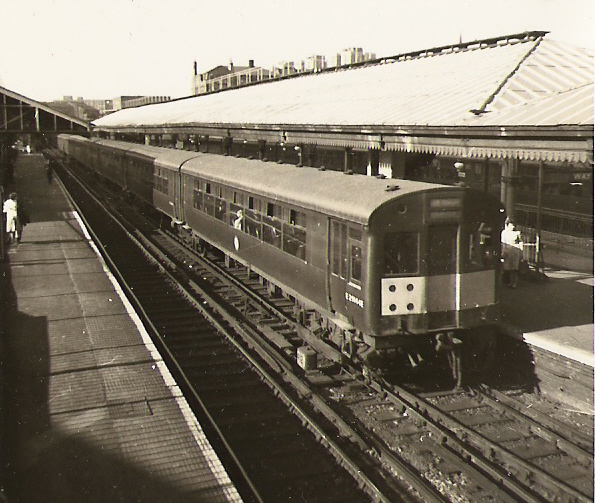 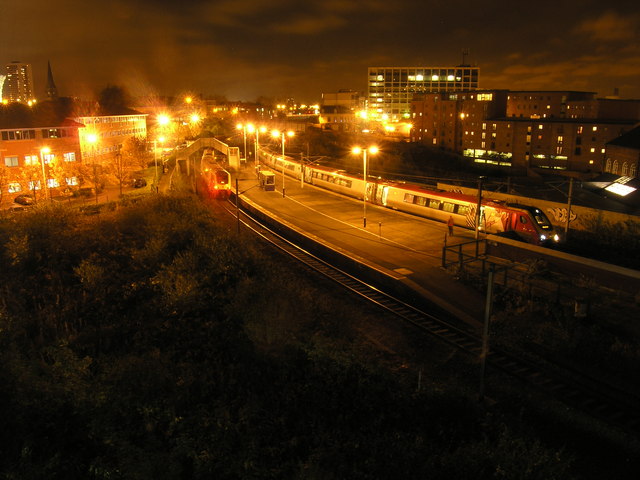 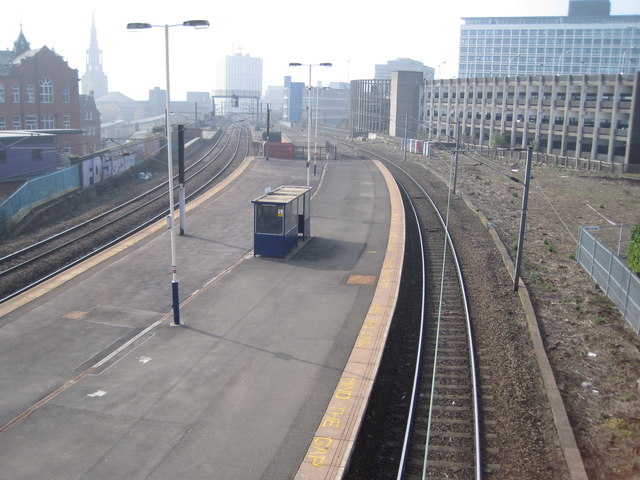 Tyne and Wear HER(4325): Newcastle, Manors Station
- "The original Manors Station was built by the Newcastle and North Shields Railway and opened in 1839. This was then taken over by the North Eastern Railway...." 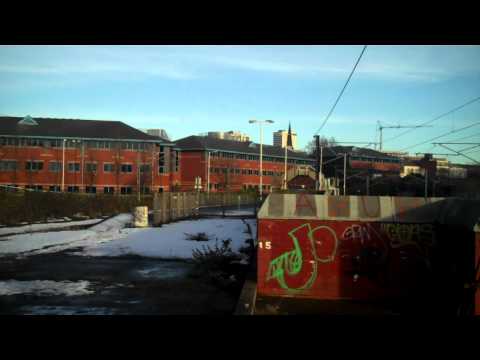 D9019 approaching Manors with a train from Edinburgh

Tyne and Wear HER(4325): Newcastle, Manors Station
- "The original Manors Station was built by the Newcastle and North Shields Railway and opened in 1839. This was then taken over by the North Eastern Railway...."