is a village in Northumberland, England about 4 miles southwest of Haltwhistle.The village lies adjacent to the River South Tyne. The place name Lambley refers to the "pasture of lambs".

Lambley used to be the site of a small convent of Benedictine Nuns, founded by Adam de Tindale and Heloise, his wife, in the 12th century. The Scots led by William Wallace devastated it in 1296 gives 1297. However it was restored and one William Tynedale was ordained priest to the nunnery in about 1508 - probably not William Tyndale, the reformer, as once believed but another man of the same name. At the time of the suppression of religious houses by Henry VIII the nunnery contained six inmates. Nothing now remains but the bell from the nunnery which hangs in the church and a few carved stones.

The village lies in the Midgeholme Coalfield and there are reserves of good quality coal remaining.

Lambley is in the parliamentary constituency of Hexham. Lambley is part of the Coanwood Parish Council area.

Coal mining. The area has previously been noted for coal mining based at Lambley Colliery. Coal reserves still exist in the area as part of the Midgeholme Coalfield. In 1990 an application was submitted to the County Council to open cast work 33 hectares of land (81.5 acres) by R and A Young Mining Ltd., Leadgate, Consett.The application noted the high quality coal to be mined (low ash and low sulphur content and high calorific value). Although this plan did not go ahead, a recent plan to open cast mine at Halton Lea Gate, a village one mile to the west of Lambley, has opened up the possibility of mining returning to the village. The Halton Lea Gate plan was approved by the government planning inspector in 2012. An amended plan was approved by Northumberland County Council in January 2014.

What was left of the nunnery was washed away by a great flood in about 1769.

Lambley viaduct crosses the River South Tyne as a series of elegant stone arches. More than 260m long, it once carried the Haltwhistle to Alston railway. The railway opened in 1852 to haul coal and lead from the Alston mines, was closed in 1976, and the viaduct allowed to decay. In 1991 the British Rail Property Board agreed to repair the viaduct and hand it over to the North Pennine Heritage Trust who would maintain it in the future.

The viaduct may have been designed by George Barclay Bruce, an eminent Victorian engineer who was involved in the Alston line before leaving for India to pioneer railway construction there. It is a particularly elegant example of Victorian engineering: the river is crossed by nine 17-metre wide arches which support a deck above the river but, as it carried a single rail track, only 3.5 metres wide. The piers to the arches are built of massive rough-faced stones each weighing up to 500 kilograms , with similar-sized stones in ashlar to the main arch voussoirs. The spandrels and piers to the wide approach arches are built of coursed rubble masonry. One end of the viaduct has been fenced off to stop people straying into Lambley railway station which is now a private house.

The War Memorial, which is a cross about in height, is located in the churchyard of the parish church of St. Mary and St. Patrick. The village of Hartleyburn joined with Lambley in erecting the memorial which was unveiled by Colonel Sir Thomas Oliver on Saturday 21 February 1920. The inscriptions and names on the War Memorial have been transcribed and published by the North East War Memorials Project.

Those who gave their lives in The Great War were:

Lambley was served by Lambley railway station on the Alston Line from Haltwhistle to Alston. The line opened in 1852 and closed in 1976.

Since 1983 a narrow gauge railway has opened on part of the original track bed. The railway, known as the South Tynedale Railway, is a 2-foot (0.61 m) gauge line and runs 3.5 miles (4.0 km) from Alston to Lintley and includes a viaduct or 2 over the River South Tyne. Efforts are being made to extend the line into Slaggyford. Subject to funding coming into place in September 2013, work should start on the one and a quarter mile extension from Lintley towards the end of the year. The South Tynedale Railway Preservation Society plans to reopen the entire branch line from Haltwhistle to Alston.

Lambley was also served by a line west to Brampton, Carlisle, which closed in the 1950s. This line, sometimes referred to as Lord Carlisle's line, served Lambley colliery and other coal mining areas.

The parish church of Lambley is in the area called Harper's Town, which suffered badly at the hands of the Scots. Hodgson found the church a very humble edifice, measuring . The pews and furniture were very rough carpentry, but it was used and had a Sunday School. It was rebuilt in 1885 to the designs of W. S. Hicks, and dedicated to St. Mary and St. Patrick. It has a chancel with fine stone vaulting, and three lancets in the east window with stained glass showing the Magi, the Crucifixion and the Resurrection. Painted panels by the altar show St. Kentigern, St. Cuthbert, St. Aidan and St. Ninian, all travelling saints. The bell in the bell cote came from the ruined nunnery. The church bell, cast in America, is one of the only two foreign bells in the diocese of Newcastle: the other is at Eglingham.

The Lambley and Hartleyburn War Memorial is located in the churchyard. Lambley Parish Church falls within the Parish of Alston Moor within the Diocese of Newcastle.

John Charlton (1827-1903) fellow of the Royal Meteorological Society. There is a fine memorial plaque to him in the parish church. 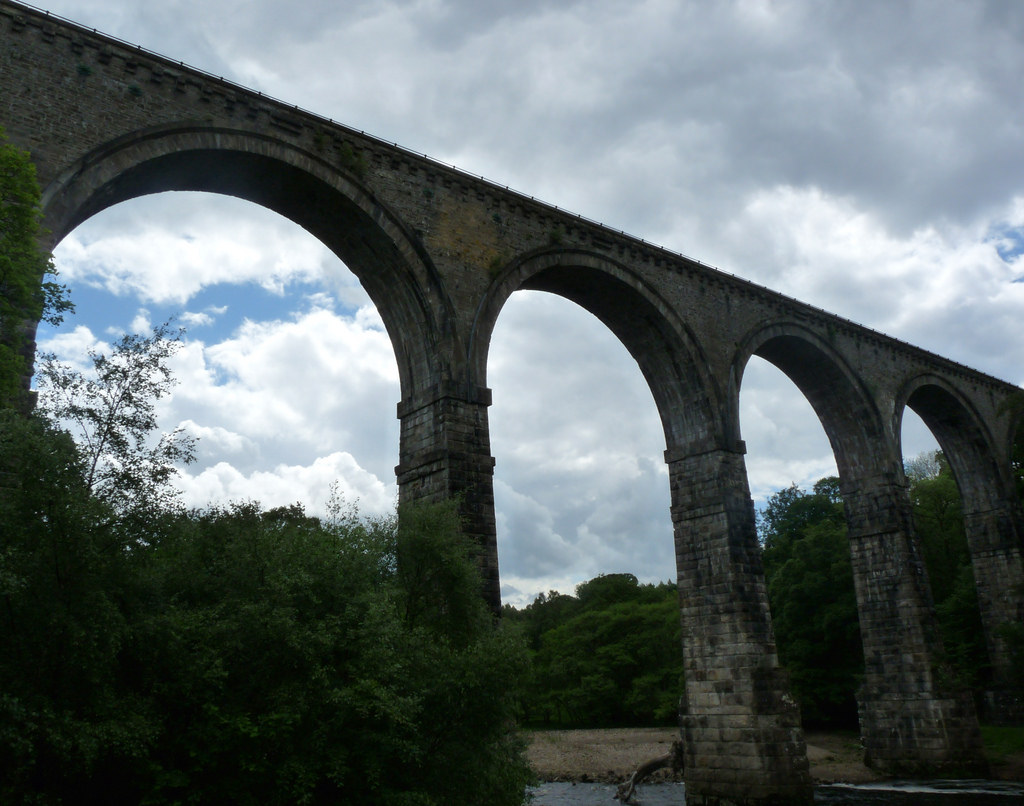 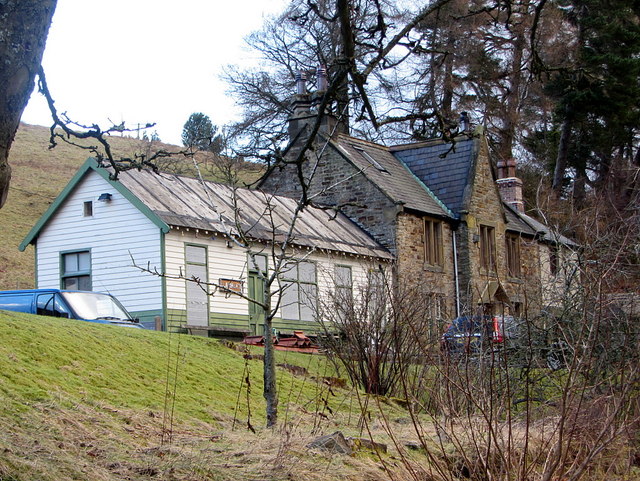 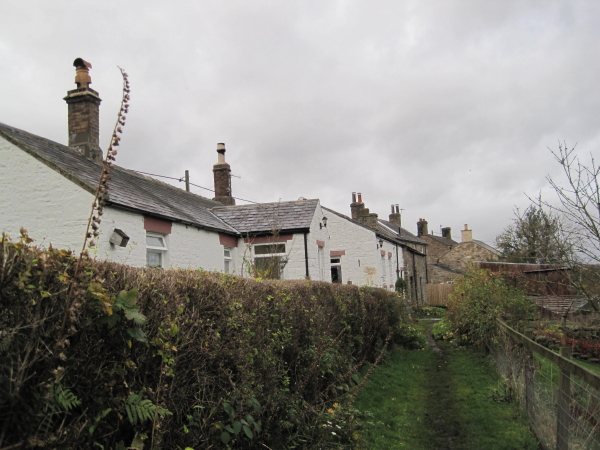 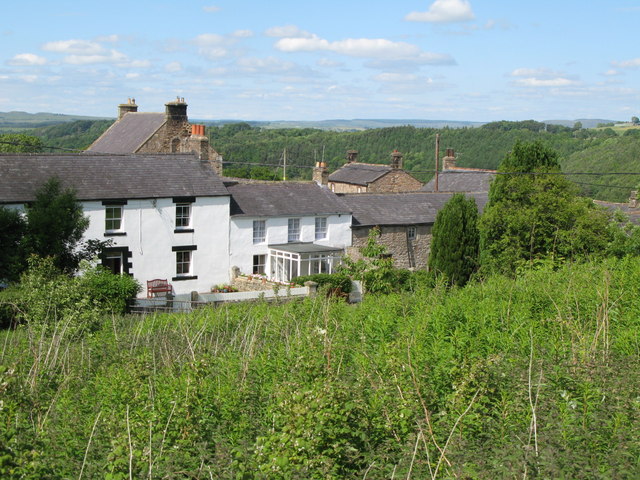 Houses in Lambley village north of the church 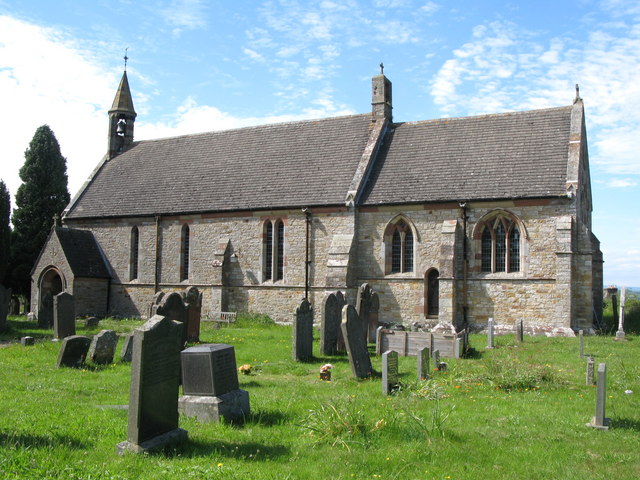 The Church of St. Mary and St. Patrick, Lambley

Houses in Lambley village north of the church

The Church of St. Mary and St. Patrick, Lambley