The first of the West Hartlepool tramways to be closed was the Foggy Furze line, which was shut down on 4 October 1923. The services on that line were temporarily replaced by motor buses, until opening of the trolleybus system. The Ward Jackson Park tramway was next to be closed, in November 1925.

One month later, on 25 March 1927, the Seaton Carew tramway was converted, bringing Hartlepool's tramway era to an end, and its trolleybus system to its greatest extent.

The system as a whole was operated by West Hartlepool Corporation. However, the route between the two towns was run on behalf of both authorities. The trolleybuses used on that route were jointly owned; each Corporation paid half the running costs of the joint route and was entitled to half of its revenue.

After the end of World War II, West Hartlepool Corporation decided to replace the trolleybus system with motor buses. In 1949, the Seaton Carew route was shut down. Closure of the other two West Hartlepool lines soon followed. Finally, on , the joint route was closed.

By the standards of the various now defunct trolleybus systems in the United Kingdom, the Hartlepool system, with its four routes, was quite small.

West Hartlepool's first trolleybuses were four Railless 4-wheel vehicles with Short Brothers 36-seat bodywork. They were numbered 1–4. In 1926, they were joined by two similar vehicles (Nos. 5–6) and a double-deck version (No. 7).

The system had a total fleet of 48 trolleybuses, with a maximum of 31 in service at any one time. None of them is recorded as having survived.

Text from Wikipedia, available under the Creative Commons Attribution-ShareAlike License (accessed: 25/11/2018).
Visit the page: Trolleybuses in Hartlepool for references and further details. You can contribute to this article on Wikipedia.
Trolleybus 1924 Hartlepool 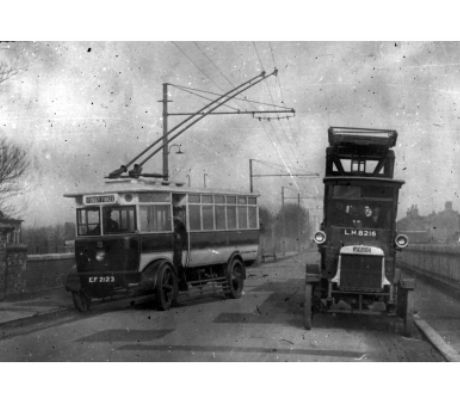