Glaciers erode predominantly by three different processes: abrasion/scouring, plucking, and ice thrusting. In an abrasion process, debris in the basal ice scrapes along the bed, polishing and gouging the underlying rocks, similar to sandpaper on wood. Scientists have shown that, in addition to the role of temperature played in valley-deepening, other glaciological processes, such as erosion also control cross-valley variations. In a homogeneous bedrock erosion pattern, curved channel cross-section beneath the ice is created. Though the glacier continues to incise vertically, the shape of the channel beneath the ice eventually remain constant, reaching a U-shaped parabolic steady-state shape as we now see in glaciated valleys. Scientists also provide a numerical estimate of the time required for the ultimate formation of a steady-shaped U-shaped valley—approximately 100,000 years. In a weak bedrock (containing material more erodible than the surrounding rocks) erosion pattern, on the contrary, the amount of over deepening is limited because ice velocities and erosion rates are reduced.

Glaciers can also cause pieces of bedrock to crack off in the process of plucking. In ice thrusting, the glacier freezes to its bed, then as it surges forward, it moves large sheets of frozen sediment at the base along with the glacier. This method produced some of the many thousands of lake basins that dot the edge of the Canadian Shield. Differences in the height of mountain ranges are not only being the result tectonic forces, such as rock uplift, but also local climate variations. Scientists use global analysis of topography to show that glacial erosion controls the maximum height of mountains, as the relief between mountain peaks and the snow line are generally confined to altitudes less than 1500 m. The erosion caused by glaciers worldwide erodes mountains so effectively that the term glacial buzzsaw has become widely used, which describes the limiting effect of glaciers on the height of mountain ranges. As mountains grow higher, they generally allow for more glacial activity (especially in the accumulation zone above the glacial equilibrium line altitude), which causes increased rates of erosion of the mountain, decreasing mass faster than isostatic rebound can add to the mountain. This provides a good example of a negative feedback loop. Ongoing research is showing that while glaciers tend to decrease mountain size, in some areas, glaciers can actually reduce the rate of erosion, acting as a glacial armor. Ice can not only erode mountains but also protect them from erosion. Depending on glacier regime, even steep alpine lands can be preserved through time with the help of ice. Scientists have proved this theory by sampling eight summits of northwestern Svalbard using Be10 and Al26, showing that northwestern Svalbard transformed from a glacier-erosion state under relatively mild glacial maxima temperature, to a glacier-armor state occupied by cold-based, protective ice during much colder glacial maxima temperatures as the Quaternary ice age progressed.

These processes, combined with erosion and transport by the water network beneath the glacier, leave behind glacial landforms such as moraines, drumlins, ground moraine (till), kames, kame deltas, moulins, and glacial erratics in their wake, typically at the terminus or during glacier retreat.

The best-developed glacial valley morphology appears to be restricted to landscapes with low rock uplift rates (less than or equal to 2 mm per year) and high relief, leading to long-turnover times. Where rock uplift rates exceed 2 mm per year, glacial valley morphology has generally been significantly modified in postglacial time. Interplay of glacial erosion and tectonic forcing governs the morphologic impact of glaciations on active orogens, by both influencing their height, and by altering the patterns of erosion during subsequent glacial periods via a link between rock uplift and valley cross-sectional shape.

Text from Wikipedia, available under the Creative Commons Attribution-ShareAlike License (accessed: 19/03/2019).
Visit the page: Erosion for references and further details. You can contribute to this article on Wikipedia.
Geography Coniston Water Bowscale Tarn 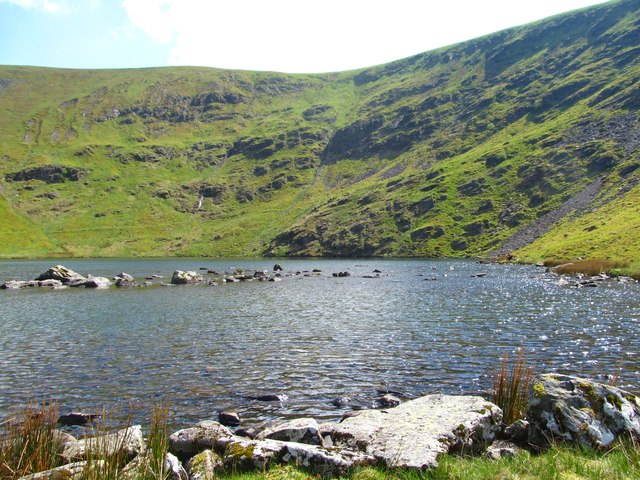 Bowscale Tarn
- Overview Map Bowscale Tarn is situated on the eastern of Bowscale Fell, and located just over a mile east of the small settlement of Bowscale in Cumbria. It is a ... 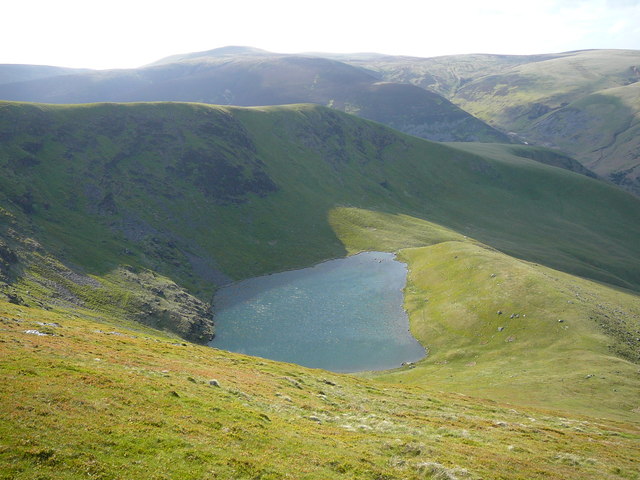 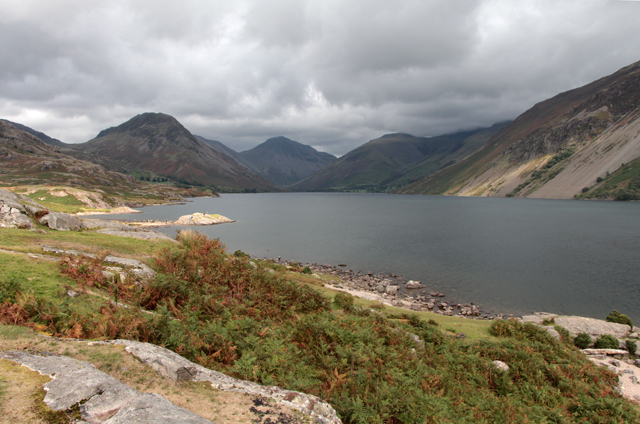 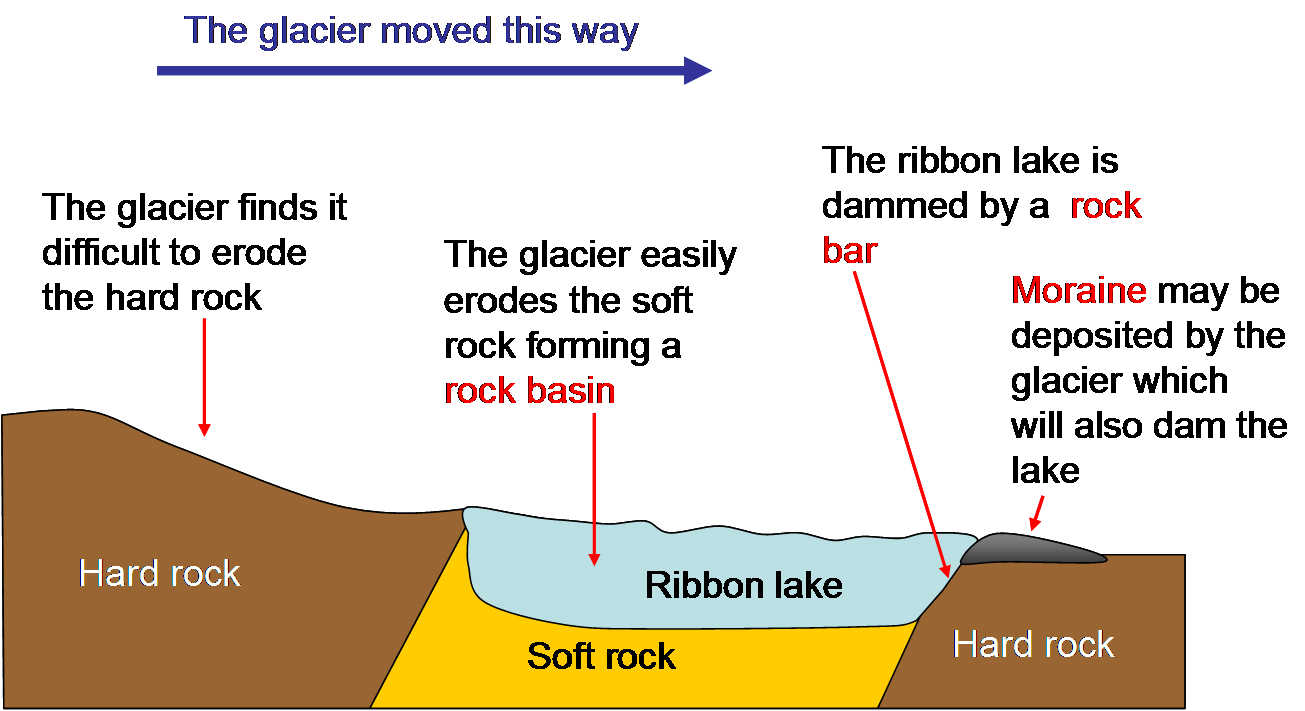 Formation of a ribbon lake
- Public Domain diagram by SuzanneKn, 2008.

Bowscale Tarn
- Overview Map Bowscale Tarn is situated on the eastern of Bowscale Fell, and located just over a mile east of the small settlement of Bowscale in Cumbria. It is a ...

Formation of a ribbon lake
- Public Domain diagram by SuzanneKn, 2008.