Darlington Football Club was established in 1883. Darlington FC were one of the original founder members of the Northern League in 1889 and went on to win the title twice in 1896 and 1900. The teams home was Feethams for 120 years, until the club moved to their new ground at Darlington Arena in 2003. Unfortunately the club went into administration in 2012. Then, under fan ownership, the club left the costly Arena and to ground-share with Bishop Auckland FC at Heritage Park.

In July 1883, a meeting was called in Darlington Grammar School to address concerns that so few Darlington-based football clubs were entering the major competition in the region, the Durham Challenge Cup. The meeting agreed with the view expressed by the Darlington & Stockton Times newspaper, that there was "no club, urban or rural, sufficiently powerful to worthily represent Darlington", decided to form a new club, and elected one Charles Samuel Craven, a local engineer, as secretary. Darlington Football Club duly entered the Durham Challenge Cup, reached the final in their first season, and won the trophy in 1885. The following season Darlington entered the FA Cup for the first time, only to lose 8–0 to Grimsby Town. Craven was instrumental in the formation of the Northern League in 1889. Darlington were one of the founder members, and went on to win the league title in 1896 and 1900; they reached the semi-final of the FA Amateur Cup in the same two seasons.

The club turned professional in 1908 and joined the North Eastern League. The 1910–11 season saw Darlington reach the last 16 of the FA Cup, progressing through five qualifying rounds to lose to Swindon Town in the Third Round Proper, and two years later they won the North Eastern League. Ground improvements begun before the First World War left the club in financial difficulty during it; the chairman of Darlington Forge Albion financed the completion of the East Stand and cleared the debts, allowing them to continue to compete. When competitive football resumed after the war, Darlington finished second in the North Eastern League, and were champions for a second time the following year. This victory was well timed, as it coincided with the formation of the Northern Section of the Football League's Third Division, which Darlington were invited to join.

Their first season in the Third Division was a successful one and they ended up in second place. Three years later, in 1924–25, they were champions and won promotion to the Football League Second Division. The 15th-place finish in 1926 remains Darlington's best League performance, but they were relegated back to the Third Division in 1927, where they remained until the Second World War put an end to competitive football. They came as high as third in 1929–30, but twice had to apply for re-election to the League, in 1932–33 and 1936–37, after finishing in last place in the section. In 1934, they enjoyed their first success in a nationally-organised cup competition, defeating Stockport County 4–3 at Old Trafford to win the Football League Third Division North Cup, and reached the final again two years later, this time losing 2–1 at home to Chester.

Soon after the Football Association gave permission for competitive matches to be played under floodlights, Darlington beat Carlisle United 3–1 in the first floodlit FA Cup match between Football League clubs, a replay held at St James' Park, Newcastle United's ground, in November 1955. The 1957–58 season saw the club equal their previous best FA Cup run, reaching the last 16 by defeating Chelsea, Football League champions only three years earlier, in the Fourth Round. After letting slip a three-goal lead at Stamford Bridge, Darlington won the replay 4–1 after extra time, described as "a most meritorious win, earned by a combination of sound tactics and an enthusiasm that Chelsea never equalled" by The Times correspondent, who felt it "surprising that extra time was necessary, for Darlington always seemed to have the match well in hand". In the League, Darlington's fourth place in 1948–49 was their only top-half finish in the first twelve seasons after the war, and when the regional sections of the Third Division were merged, they were allocated to the new Fourth Division.

The Supporters' Club raised £20,000 to pay for a roof at one end of the Feethams ground and for floodlights, which were first used on 19 September 1960. Later that night, the West Stand burned down due to an electrical fault. Darlington's attendance record, of 21,023 against Bolton Wanderers in the League Cup fourth round, was set two months later. Under the management of Lol Morgan, they won promotion to the Third Division in 1966. A crowd of 16,000 watched the draw against Torquay United on the last day of the season which ensured they finished as runners-up, but they were relegated the following year.

Darlington reached the quarter-finals of the 1968 League Cup; drawn away to Brian Clough's Derby County, they took the lead, only to lose 5–4. During the 1970s the club had to apply for re-election to the League five times, and by 1982 they were facing a financial crisis which they survived thanks to fundraising efforts in the town. Three years later they won promotion by finishing third in the league under manager Cyril Knowles. Darlington spent two seasons in the Third Division; the 13th-place finish in 1986 was the highest position they achieved in the Football League since the introduction of the four-division structure in 1958, but they were relegated the following season.

Though Brian Little's appointment as manager in February 1989 failed to stave off relegation to the Conference, he went on to lead them to successive promotions. An immediate return to the Football League as Conference champions preceded the Fourth Division title in 1990–91, but Little's departure for Leicester City was followed by relegation and a succession of short-term managers. They came close to a return to the Third Division via the play-offs in 1996; on their first visit to Wembley, against Plymouth Argyle, they were beaten by a Ronnie Mauge goal.

The 1999–2000 season, the first under new chairman George Reynolds, was marked by Darlington becoming the first team to lose an FA Cup tie and still qualify for the next round. Manchester United's involvement in the FIFA Club World Championship meant they did not enter the FA Cup. To decide who took their place, a "lucky losers" draw was held from the 20 teams knocked out in the second round; Darlington were selected, and lost their third-round tie 2–1 to Aston Villa at Villa Park. Their second Wembley appearance came later that season, facing Peterborough United in the play-off final after automatic promotion had seemed certain earlier in the season. After a 3–0 aggregate semi-final win over Hartlepool United, Quakers missed numerous chances and were again undone by a single goal, this time from Andy Clarke.

In 2002, Darlington made unsuccessful approaches to sign Paul Gascoigne and Faustino Asprilla, and moved into their new stadium, named the Reynolds Arena, in summer 2003. Reynolds had paid the club's debts when he took over, but the cost of the stadium, partly financed with high-interest loans and built without realistic expectation of filling it, drove the club into administration six months later. Reynolds resigned as a director in January 2004 with the club under threat of imminent closure. A benefit match, featuring footballers such as Gascoigne, Bryan Robson and Kenny Dalglish, played in front of a crowd of over 14,000, raised £100,000 to help ensure survival in the short term. Despite the off-field problems, David Hodgson, in his third spell as manager, and his players produced some fine performances as the team avoided relegation.

At the end of the season, Reynolds was obliged to hand over control to the Sterling Consortium to bring the club out of administration, Stewart Davies taking over as chairman. He and his staff adopted a fan-friendly approach, in contrast to the abrasive Reynolds, before in 2006, the club was sold to property developer George Houghton. For four consecutive seasons, under Hodgson, sacked in 2006, and then under successor Dave Penney, the Quakers finished in the top half of the table, reaching the play-off semi-final in 2008 only to lose to Rochdale on penalties. In February 2009, Darlington again went into administration, triggering an automatic 10-point deduction, without which they would have again reached the play-offs. Fundraising efforts kept the club going, but when no buyer was found for the club by a May deadline, the administrators made the majority of the first-team squad available for transfer and cut staff numbers to a minimum. On 20 May, Houghton returned to the club as chairman, appointed former Middlesbrough boss Colin Todd as manager, and brokered an agreement which led to the club coming out of administration and ownership passing to local businessman Raj Singh, enabling the club to compete in the 2009–10 season without any points deduction. Todd left the club after losing seven of his first nine games and was replaced by former Republic of Ireland manager Steve Staunton, who only won four of 23 league games.

The club were eventually relegated to the Conference, and suffered more managerial turmoil during the summer when Simon Davey and successor Ryan Kidd both left within 11 days, to leave Mark Cooper in charge. He led the club to victory in the 2011 FA Trophy Final at Wembley Stadium, defeating Mansfield Town 1–0 with a goal from Chris Senior in the last minute of extra time. Following a succession of poor performances at the start of the 2011–12 season, Cooper and his assistant Richard Dryden were sacked by the club on 24 October 2011. A little more than two months later, Singh placed the club into administration for a third time in less than a decade. A number of players were released and allowed to join other clubs for nominal fees in January before interim manager Craig Liddle and the remaining playing staff had their contracts terminated by Darlington's administrator. Two days later, the club was spared from liquidation after a last-minute injection of funding by supporters' groups. Enough funds were raised for Darlington to complete the season, but relegation was confirmed with three matches remaining. After the club was taken over with the intention of moving into community ownership, without entering into a Creditors Voluntary Agreement (CVA), Darlington were relegated four divisions, to the Northern League Division One, on the recommendation of the Football Association. Martin Gray was appointed manager. On 21 June 2012, the Football Association rejected an appeal, confirming that the club was to be treated as a new club entered into the Northern League, and would no longer be able to play under the name Darlington F.C. The new owners opted to rename the new club Darlington 1883.

Text from Wikipedia, available under the Creative Commons Attribution-ShareAlike License (accessed: 09/10/2016).
Visit the page: Darlington F.C. for references and further details. You can contribute to this article on Wikipedia.
Football 1883 Darlington Darlington Arena Feethams (Stadium) 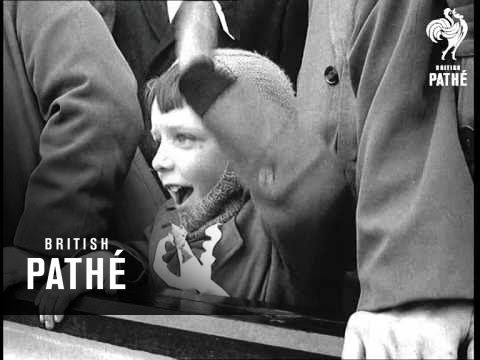 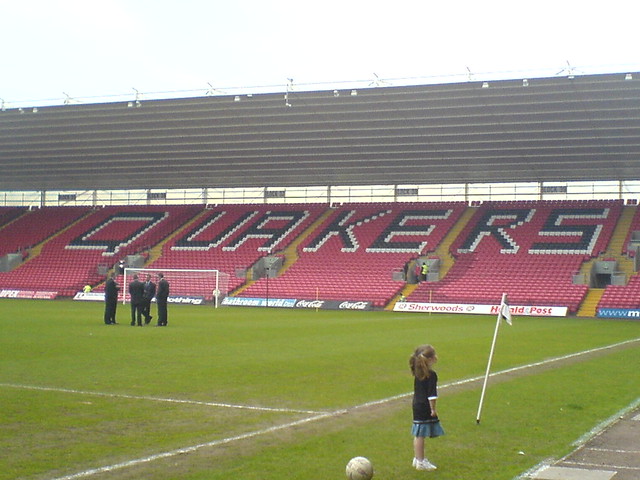