BRAMPTON (St. Martin), a market-town and parish, and the head of a union, in Eskdale ward, E. division of Cumberland; containing, with the townships of Easby and Naworth, 3,304 inhabitants, of whom 2,754 are in the town, 9½ miles (N.E. by E.) from Carlisle, and 305 (N. by W.) from London. According to Camden, this was the site of the Roman station Bremetenracum, which some modern writers, with more probability, have fixed at Old Penrith. The town sustained extensive damage during the wars of Edward II.; of which, as well as of its earlier importance, it still exhibits evident marks. In Nov. 1715, a large force under the command of Mr. Forster, who had received a general's commission from James Stuart, entered the town, where they proclaimed the Pretender; and hence marched to Penrith. During the rebellion of 1745, the young Pretender led his troops hither, to observe the motions of Gen. Wade, who was mistakenly reported to be marching from Newcastle to the relief of Carlisle; and after remaining here several days, he proceeded to Carlisle, which had surrendered to his arms.

The town is situated between the small rivers Irthing and Gelt, tributaries to the Eden, about one mile south of the former, and two and a half from the point where they unite; and lies about two miles south of the Picts' wall. It occupies a deep narrow vale embosomed in hills, and consists principally of two streets irregularly built, and a spacious market-place; the houses have been mostly rebuilt, and are of handsome appearance: the inhabitants are well supplied with water. The manufacture of gingham employs nearly 700 persons: there are two breweries. The railway between Newcastle and Carlisle passes a mile and a half to the south, and is connected with the town by a good road, and also by means of the Earl of Carlisle's railway, which reaches to the extensive coal and lime works at Tindal Fell, and by which coal and lime are brought hither in abundance. The market is on Wednesday, and is well supplied with corn, admitted toll-free; fairs are held on April 20th, the second Wednesday after Whitsuntide, the second Wednesday in Sept., and the 23rd of Oct., for hornedcattle, horses, and pigs. The county magistrates hold a petty-session every alternate Wednesday; and courts leet and baron for the barony of Gilsland are held at Easter and Michaelmas, in the town-hall, a neat octagonal edifice with a cupola, erected by the Earl of Carlisle in 1817, on the site of the former hall, in the market-place, the lower part being formed into a piazza, under which butter, eggs, poultry, &c., are sold on the market-day.

The living is a vicarage, valued in the king's books at £8; net income, £466; patron and impropriator, the Earl of Carlisle: in 1777, land was assigned in lieu of tithes. The present church was built in 1788, out of the chapel and tenements of an almshouse, and with the materials of the old church, the chancel of which is still remaining on the southern bank of the river Irthing, about a mile west of the town, being used for the performance of the funeral service for those who are interred in the cemetery. The church was greatly enlarged in 1827 at an expense of £1800: on which occasion the Rev. Mr. Ramshay presented five bells and an organ. There are places of worship for Independents, Primitive and Wesleyan Methodists, and Presbyterians. The poor law union comprises 14 parishes or places, and contains a population, according to the last census, of 10,525.

Two miles east of Brampton, and about a mile south of the Irthing, commanding a fine view of the vale of St. Mary, through which that river flows, is Naworth Castle, the ancient baronial seat of the lords of Gilsland, the earliest notice of which occurs in the 18th of Richard II. The walls, including two large square towers in the front, besides others at the angles, inclose a quadrangular area, each side of which measures 40 paces: the hall, 70 or 80 feet in length, and of proportionate width and height, displays all the magnificence of feudal grandeur; and the chapel, to which there is a descent of several steps, is decorated with a profusion of armour. The dungeons of the castle, which were the prison for the barony, are in their original state; they consist of three cells underground, and one above, and the strong iron rings to which the prisoners were chained are yet remaining. A great portion of this splendid castle was burnt down on the 18th of May, 1844; but it has been restored, as far as practicable, by Viscount Morpeth, eldest son of the Earl of Carlisle. To the north-east of Brampton is a high conical hill called the Mote, about 300 feet above the level of the streets, and from the summit of which, now planted with trees, a most extensive view of the surrounding country is obtained: at some distance from the base are vestiges of an intrenchment, and a breastwork of considerable strength. It is supposed to have been originally a Danish encampment, or probably a place of security for the removal of property in case of invasion, as, from the steepness of the acclivity, a small number of men on the summit might overpower an assailing multitude. It was used as a seat of justice for the barony of Gilsland, and at present forms a link in the chain of telegraphic communication between the northern parts of England and the southern parts of Scotland. To the south of the town is a fine quarry of freestone, where the Romans obtained part of the materials for building the great wall, vestiges of which are still visible. Walton House occupies the site of a station on the wall; and on the rocky banks of the Gelt are some inscriptions of the time of Agricola, one of whose legions was stationed near Brampton. 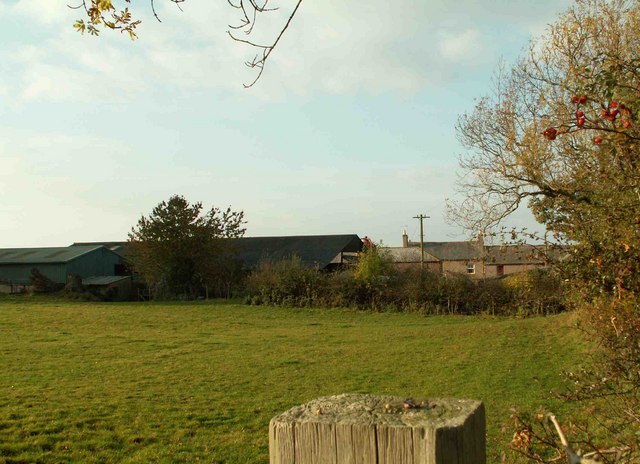 Great Easby
- Overview Map Street View Easby is a hamlet in the City of Carlisle district of Cumbria, located about 1 mile north-east of Brampton. It consists of Great Easby Farm and ...

Great Easby
- Overview Map Street View Easby is a hamlet in the City of Carlisle district of Cumbria, located about 1 mile north-east of Brampton. It consists of Great Easby Farm and ...